Quick Finite State machine recap: they’re simple machines capable of representing regular expressions, and some more complicated things, too. They look like this:

It’s a series of states with different “transition moves” defined to travel in between them. States can also loop on themselves, like we see with the ‘b’ moves in the machines above.

Notice the states with double rings: these are called the “final states.” They are a spot where the machine can stop producing/consuming input and safely stop.

Now for the distinction: compare the machines above with this one: 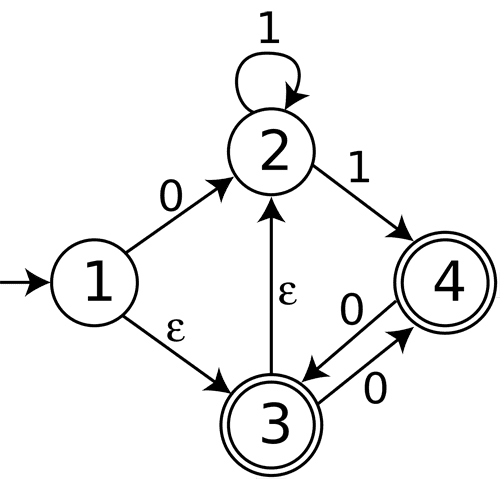 Notice the differences: there are some epsilon-transitions (or “ε-transitions”), and states can do multiple actions with the same symbol! This is the main distinction between DFAs and NFAs, as their name implies: Deterministic machines have at most one move defined for each alphabet symbol, and do not allow for ε-transitions. Nondeterministic machines on the other hand, can break both of those rules.

An interesting fact, and the basis for this project, is that for every NFA that exists, a corresponding DFA can be created using the subset construction algorithm. Here it is in pseudocode:

The file takes in a text description of a NFA in table form:

And it outputs the construction process and corresponding DFA in table form:

I spent a lot of time considering which data structures to use to contain the NFA and DFA representations. At its core, an NFA consists of a variable number of states. Each state has a series of moves defined on them over the “input alphabet.” And each move has a list of states associated with it.

So if we put that all together, what does it look like? I call it a nested map:

The data structure maps an integer (a state) to another map (the moves), which is itself a map of a char (a character from input alphabet) to a vector of integers (the moves defined for that input symbol).

For this reason, it made sense to use a map between integers and a DFA state struct:

The code for this project can be found here.